Doubting Thomas gets a bad rap. Sure he is was the last person in Christ inner circle to believe that Jesus was resurrected, but the others were not exactly waiting at the tomb on Sunday morning.  They were told no less than 9 times that Jesus would rise again.
If you or I made that claim everyone would think that we were nuts, but Jesus had shown them his power over and over again. He had resurrected  Jairus’s daughter
(Luke 8:41-42) and   Luke 8:49-55)  He also resurrected Lazarus in John 11:11-45 and many other miracles. He had some pretty impressive credentials, yet they were all shocked when he did what he said he would. When Jesus appeared to 10 apostles they thought that he was a ghost, Jesus had to let them examine his body, and let them watch him eat to prove he was alive! Luke 24:36-43
Then we have Thomas who also needed evidence John 20:25-28
The only real difference that I see between the way Thomas behaved, and the other disciples behaved Is the Thomas did not believe his fellow disciples.
Since some of them were actually going to write parts of the New Testament it was important that the ones who transcribed the Bible be trusted, but he did not.

I would also like everyone to notice that Jesus didn’t mind giving people evidence. Some believe that we must take everything on blind-faith, but if blind faith were necessary, why did Jesus perform miracles proving who he was? Why did he let the apostles touch the wounds on his body?
We should also notice how the disciple’s lack of faith did not reflect well on them, they had seen many miracles, they had heard the predictions, yet they were still slow to believe.  While it would have been a sweeter story had all the disciples been waiting at the mouth of the cave on that Sunday morning to see him walk out, in one way their doubt is our evidence.
If they had crafted an elaborate lie why would they confess their lack of faith? When people make up stories, they want to make themselves good. They want to be the hero in their own story. The only possible reason they had for making themselves look bad, is that they were telling the honest truth, even leaving in all the things that made them look bad.

Sold by my Amazon affiliate 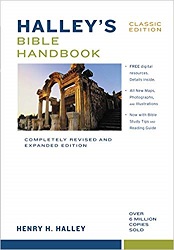 Halley’s Bible Handbook is a handy reference guide in my personal library, that not only helps you get a better understanding of each chapter and verse in the Bible,  gives details about the culture and histories surrounding the Bible, and the history describing how the Bible was passed down to our generation.
Thank you for supporting SmartChristian.net with your purchase.