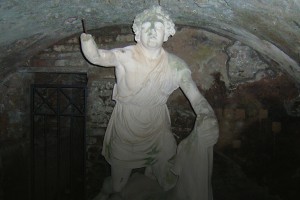 It’s been popular in the past ten years (or so) to describe Jesus as nothing more than a “retelling” of prior “dying and rising” gods such as Horus or Osiris. Skeptics who make such claims typically describe a number of shared characteristics in an effort to highlight the similarities between Jesus and prior mythologies. Perhaps the most persuasive case of potential mythological “borrowing” is found in claims related to Mithras, the ancient mythological deity worshipped in Persia four hundred years prior to Jesus (and worshipped continually throughout the first four or five centuries of this millennia in Rome, right alongside those who worshipped Jesus). Jesus “mythers” claim Mithras was born of a virgin, in a cave, on December 25th, and his birth was attended by shepherds. Mithras was considered a great traveling teacher and master. He had twelve companions (or disciples) and promised his followers immortality. Mithras performed miracles and sacrificed himself for world peace. He was buried in a tomb and after three days rose again. His followers celebrated this event each year at the time of Mithras’ resurrection (and this date later became “Easter”). Mithras was called the “Good Shepherd,” was identified with both the Lamb and the Lion, and was considered to be the “Way, the Truth and the Light,” the “Logos,” the “Redeemer,” the “Savior” and the “Messiah.” His followers celebrated Sunday as His sacred day (also known as the “Lord’s Day,”) and they celebrated a Eucharist or “Lord’s Supper”. Mithras, by this description, sounds a lot like Jesus doesn’t he?

Read why the popular belief is wrong at: Is Jesus Simply a Retelling of the Mithras Mythology? | Cold Case Christianity