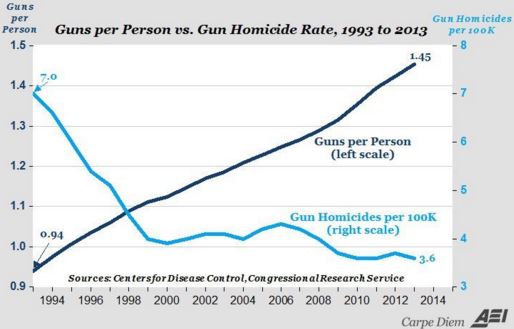 Gun ownership up, gun violence down

Someone asked me about what I thought of Australia’s experience banning the use of handguns for self-defense against criminals, and so I thought I would link to an article from The Federalist, then explain what peer-reviewed studies say about the issue.

Let’s start with The Federalist.

The argument, as Vox’s headline puts it, is “Australia confiscated 650,000 guns. Murders and suicides plummeted.”

The piece, along with many gun control advocates, cites a Harvard University study whose conclusion begins with this line: “It does not appear that the Australian experience with gun buybacks is fully replicable in the United States.” Not a great start for Vox’s angle, but I digress.