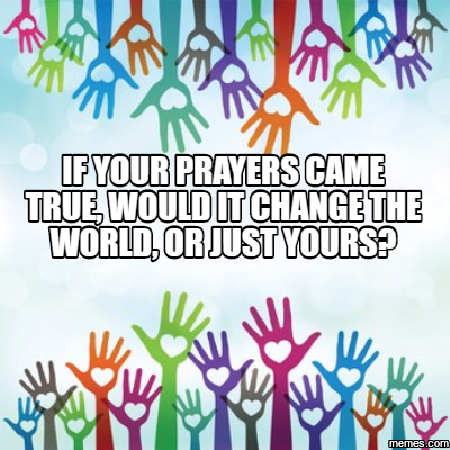 I have a feeling that most people’s prayers are smaller than they should be.  Yes, we should pray for those we love, but how many people pray beyond that?
The world is filled with troubles,  people attacking innocent police officers, different races of people being prejudice against each other, terrorist, rumors of war, Christians getting killed for simply being Christian. A president that is far from perfect, but not half as bad as the media portrays, the list goes on and on. Do you pray for those people?

The Bible says that we are to pray for all of those in authority. Yes, there are some leaders that are hard to pray for, but when 1 Timothy 2:1-4  was written, the leadership of those who murdered Christ was still fresh in their memories.  If the Bible writers prayed for those who were responsible for the murder of Christ, we certainly can pray for those leaders like Obama, and Trump.  An answered prayer for a world leader could change the world!

Pray for our enemies,  Matthew 5:43-48
Again this is not something that is easy to do.  I know some people that I would rather slap, then pray for, but there was a time that I deserved a pretty harsh slap myself. God had mercy on me and made me a better person.  Wouldn’t the world be much better off if the people you hate most, turned to God and repented of their evil ways?  But don’t stop at just your personal enemies, the church has enemies too.  There are those who are crafty about bringing the Church down right here in America, those who pervert the Bible to make it say things that it doesn’t. Those who hate America, and hate freedom. While these may be a bit too numerous to pray for all at once, you should pick one or two groups, to pray for specifically.

The list of people and groups that need prayer is overwhelming, but it becomes easier when you realize that you don’t have to pray for them all at once.  One possible way to do it is to use whatever your favorite social media is for inspiration. If you read a news story that saddens you pray, if you read a story about someone who was brave, pray that someone who needs an extra dose of bravery to do the right thing gets that help from God.  If your newsfeed doesn’t have much of that kind of inspiration, please subscribe to a group that will inspire you to pray, like the news,  there are also advocacy groups of all kinds, some are bound to pull at your heart strings.

14 Now we exhort you, brethren, warn them that are unruly, comfort the feebleminded, support the weak, be patient toward all men.

15 See that none render evil for evil unto any man; but ever follow that which is good, both among yourselves, and to all men.

18 In every thing give thanks: for this is the will of God in Christ Jesus concerning you.

One thought on “Change the World!”