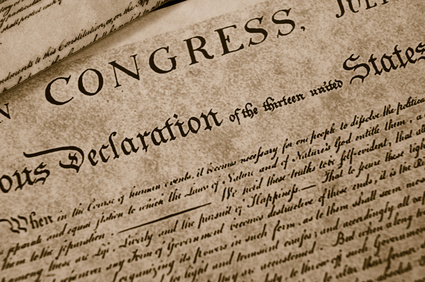 When in the course of human events, it becomes necessary for one people to dissolve the political bands which have connected them with another, and to assume among the powers of the earth the separate and equal station to which the laws of nature and of nature’s God entitles them, a decent respect to the opinions of mankind requires that they should declare the causes which impel them to the separation. We hold these truths to be self-evident, that all men are created equal, that they are endowed by their Creator with certain unalienable rights, that among these are life, liberty and the pursuit of happiness.

The words of The Declaration of Independence have been called America’s birth certificate.  The people who signed it risked not only their lives, but the lives of their families, and all their property.  You can bet they made sure to agree with every word it said before they signed it.  They even agreed with the phrases that I put in bold print, nature’s God, and endowed by their creator. Who could they have been talking about if not the God that inspired people to move here in search of religious liberty?

Yet some would have us believe even though the founders based their rights in their creator, who is nature’s God that they did not want God to have anything to do with this country. While it will take more evidence to prove that the God that they were referring to was the God of the Bible, those who read the Declaration in full with an open mind should be willing to consider the possibility that the founders had no problem with God.

You can read the Declaration of Independence in its entirety at

The Declaration of Independence

or in the book Original Intent: The Courts, the Constitution, & Religion
available at Amazon