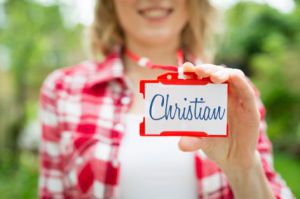 Surprising Answers People Give for Calling Themselves “Christian” Christian in name only? Just because someone says they’re a Christian, doesn’t mean that they even understand what it’s like to be follower of Jesus Christ. Some just say it’s because that is how they were raised, or it’s because they think it’s American to be a Christian. They are “Christian in name only (CHINOs).” If you were to ask them why they are a Christian, you may find their answers lacking. Here are some: “I’m called Christian, when I wouldn’t really call myself one. I don’t know whether there are gods and goddesses or one god, so I just believe that something is out there watching over me. I’m also kind of forced into being called a Christian because of the fundamentalist Christians in my family.”

Please vist Think Divinely – Surprising Answers People Give for Calling Themselves “Christian” for the rest of this post. 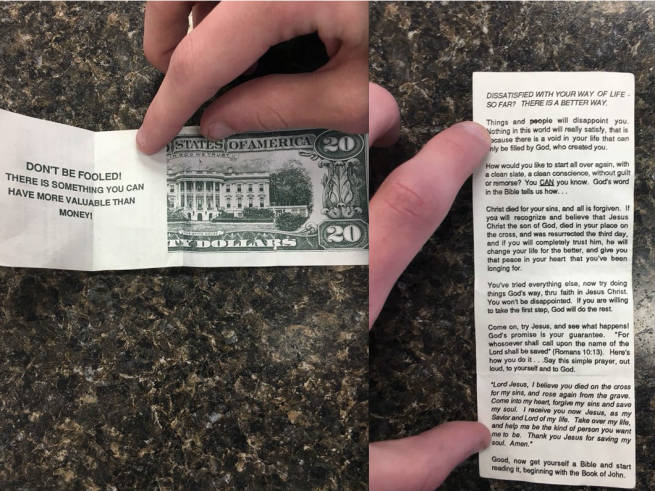 The Gospel is more valuable than money, but it cost you ten cents or less to buy that tract.  What did the tract give to the person who is wondering how they are going to feed their child on a salary that is much less than minimum wage when no one tips them real money?  It gives them the feeling that Christians are cheapskates and selfish. Some may even get the impression that Christ is as fake as the money that you tipped them with. That is not the right impression to give someone that you want to become a Christian.
Giving them a tract is great, giving them fake money is not. Please consider that most waiters and waitresses are barely scraping by. Give them a real tip!  When they have some of their bills paid, and their kids are fed, they are much more likely to respond positively to a tract.

Source: Waiter Gets Fake $20 Tip, Turns Out To Be Christian Pamphlet 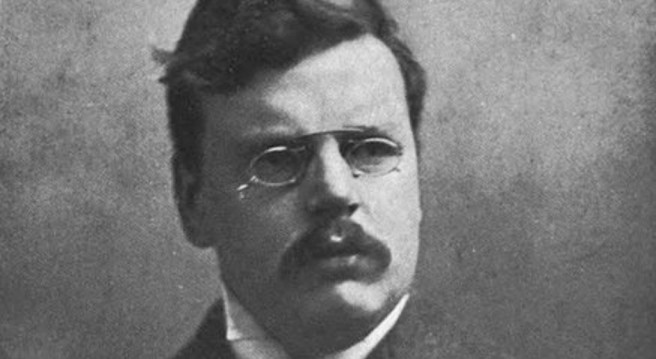 Argument #1: There are many ancient mythological accounts that parallel the Christian story. Chesterton’s Response: If a story appears repeatedly in various cultures, might it point to something real? In J. R. R. Tolkien’s famous stroll with a still skeptical C. S. Lewis, Tolkien made the case that Christianity was the myth that really happened. It was the true myth to which all the other stories were pointing. Tolkien’s logic helped Lewis come to faith. But that line of logic wasn’t new with Tolkien. He was echoing Chesterton’s perspective from two decades before.  “If the Christian God really made the human race, would not the human race tend to rumors and perversions of the Christian God? If the center of our life is a certain fact, would not people far from the center have a muddled version of that fact?… When learned skeptics come to me and say, ‘Are you aware that the Kaffirs have a story of Incarnation?’ I should reply: ‘Speaking as an unlearned person, I don’t know. But speaking as a Christian, I should be very much astonished if they hadn’t.’” 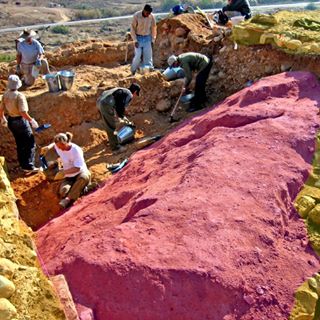 Top 12 Reasons Sodom is Tall el-Hammam In 2013 I was fortunate to enroll in a graduate level class from the lead archaeologist running the excavation, Dr. Steve Collins. Here is his top evidence Sodom is Tall el-Hammam compiled from my notes. All of this info can be found on Dr. Collins’ website, particularly here and here, or in his book Discovering the City of Sodom.

#1. There’s evidence the men at the site practiced the kidnapping and raping of young boys.